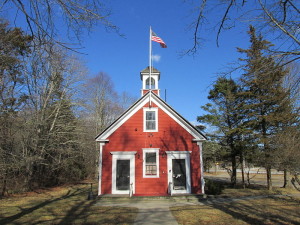 This is a little historic schoolhouse in Cedarville, Massachusette, taken by John Phelan

Some thoughts on the origins of Massachusetts government. 1. Recently I visited a small city in another state that had changed its city border at one time, so that it would not need to supply water, or power to the residents in what then became an unincorporated area, part of the county system. 2. A few months ago, an old friend mentioned unincorporated areas in relation to home values there, in yet another state. And 3. just this past week someone else asked me, why every town and city in Massachusetts has it’s own schools and police department?

There is an answer, and it lies in the organization of settlements and towns beginning with settlement in 1630, and unique to the New England states. Towns were set up by the Massachusetts Legislature, known as the Great and General Court, every town that now exists was at one time created from another town. (That is except the first three or four which were created out of the wilderness This means that there was never open, unincorporated county land outside, within or between the towns. Every inch of every town in Massachusetts used to be part of a town, even if it was a different one.

The first towns of Newtown, today’s Cambridge, Dedham and Concord were set up and settled beginning in 1635. The town of Dedham, for instance ran from Boston to the Rhode Island line, some two hundred square miles. All the towns within that area used to be Dedham, not Norfolk, or Bristol County. (Towns are within county limits, but no one lives outside a town or city.) As the towns grew, people within the towns, who did not live in the original settlement, petitioned the General Court to establish their own church. From there, they petitioned the Court to set up a new town, with its own town meeting. (In the 1600’s the right to vote was extended ‘only’ to male church members, about 70% of men. This was the greatest suffrage in the world at the time.)

The Town: Unlike New York or Philadelphia which were called ‘city’ from their founding, all cities in Massachusetts used to be towns. Boston was first when it became a city in 1822, Worcester 1848, and Springfield, 1852. (I just looked at a yahoo site that listed biggest cities in Massachusetts, many of them are incorporated as towns, and intend to remain so.) This is a minor difference to many, obviously to yahoo, but it has to do with control, who decides what happens where you live. Town Meeting is the rawest, most basic form of democratic local government in the world.

At the town meeting every eligible voter can attend, propose bills, (still called warrants), and vote the town’s business. Over time many towns have developed layers, such as selectmen who conduct the town’s business, but the citizens still hold yearly or bi-yearly meetings. At one time some towns in Vermont voted to end the Viet Nam War, and last year town meeting in Concord, MA voted to ban bottled water. Those are only two examples of how intimate the proposals and voting in a town meeting can be. Mostly it meets for things like appropriating money for repairing pot-holes and the school budget.

Which gets us to schools, fire departments and such: Towns do share high schools, snow plowing equipment and material buying, but even in towns with regional high schools, each town maintains a school board. That is local control. In a state with no county government in civic matters, (criminal only) no county roads, (state and city/town only) and town control over water bottles; control over land and schools it to be expected.

Do cities have Town Meetings?
No. A city’s legislative body is called a city council or a board of aldermen. Citizens do not govern a city directly.

What’s the difference between cities and towns? Size?
Municipalities decide whether to have a city or town form of government. Size is one factor in the decision. Towns with less than 12,000 inhabitants cannot adopt a city form of government.

1.It sets the salaries for the elected officials.
2.It votes to appropriate money to run the town.
3.It votes on the town’s local statutes, which are called by-laws.

Other than who may vote, do open Town Meetings basically operate the same way as representative Town Meetings?
Yes.

Anything else I invite you to read the website itself.
http://www.sec.state.ma.us/cis/cistwn/twnidx.htm