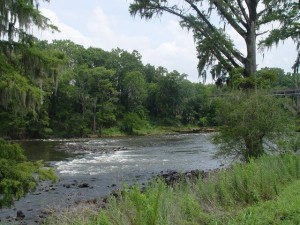 Not long ago I talked to an old friend about my work. I promised her that once in a while I would include something from or about the south. Well, after a recent trip to Georgia I got inspired to rework a book I wrote thirty years ago about my grandmother, Kate Fort Codington. I include here a story about her childhood on a plantation near Albany, GA. Her father John Porter Fort had bought the land before his marriage, in 1881. (More about him later.)
The six Fort children loved this land of cotton and deep swamp, they named it Cooleewahee after call of the wood thrush.

My Aunt Catherine wrote this for me in 1979:

It was Brooks Locket, the family butler and driver of John Fort’s two white Kentucky thoroughbreds, who taught Mother this song, and who at one time saved her from certain death, after he followed little Kate through the open door of the ginhouse. He saw her, a joyous little tomboy of about four, climb up on a piece of machinery and dive headfirst into a deep, fluffy pile of unbaled cotton. She was immediately unable to move or to breathe and would have suffocated if the horror-stricken Brooks had not extricated her. “Miss Katie, Don’t you never do dat again!”
The dance is called a “shout”, the feet are moved somewhat like a Charleston, the dancer leans over from the waist. It begins with shouting out ‘oly man or ‘oly woman, and then continues:

Simon Cyrene gwine dig my grave,
Angel Gab’l gwine hol’ me down,
Hol’ me down with a golden chain –