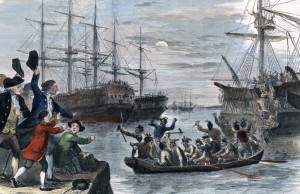 December 16 two-hundred and forty years ago, that’s 1773, a gang of seamen and mechanics, Boston harbor’s working men, after listening to debates and lectures for nearly four weeks, dumped million’s of dollars worth of East India Company tea into Boston Harbor. This event was originally called ‘the destruction of the tea,’ and over the years it has come to be known as The Boston Tea Party. (Not to be confused with a former rock ‘n roll venue of the same name.)

The arguments the men, women, and children heard, involved much talk of ‘taxation without representation’, and a governor who was out of touch with the needs of the Province. He, of course, was an employee of the King, and knew it. The issue being discussed was over three ships in the harbor. By statute, they had to be moved that night, and it was Governor Hutchinson’s decision either to land the tea, that was unload it, or allow the ships to sail out of the harbor and back to London.

Most of Boston wanted the tea sent back. By itself that was contentious. Boston was the largest and busiest port west of Plymouth, England, and busy, profitable ports are not in the habit of sending ships back where they came from without an exchange of goods. But that was exactly what the citizens of Boston were clamoring for. And it wasn’t even over the tea.

Not over the tea? No, non-importation agreements had been in place for years by then. These were agreements that town meetings had voted on and signed throughout New England, promising that British made goods would not be sold, purchased or consumed. Tea had been politically and socially too hot to drink or handle for a decade, and no one protesting the tea-ships had sipped a cup for years.

What then? Thomas Hutchinson, the man who was to decide if the ships were to stay or go, had already decreed that only a few shops in Boston would sell the East India Company tea sitting in the harbor. And not surprisingly the owners of those few shops were friends and relations of Gov. Thomas Hutchinson. So when the Governor sent word that the ships should be brought in, unloaded, and the tea brought to the approved-merchants’ warehouses; no one was surprised. It was after Hutchinson’s order was given, that Samuel Adams stood at the pulpit at Boston’s Old South meetinghouse and gave the sign that sent the disguised workmen down Milk Street to the harbor to dunk the tea.

Adams said: “This meeting can do nothing more to save the country!” the men responded “huzzah” and “Boston harbor a tea pot tonight”. And off they went.

People from Rhode Island and North Carolina have pointed out on Facebook and other places, that it happened at their ports too. They are correct. But it wasn’t what Bostonians did that night that started the American Revolution, it was what Parliament did in response to the tea’s destruction that started the war. It was Parliament’s efforts to punish Boston with a series of laws now referred to as the Insufferable Acts, which caused worry in the Massachusetts countryside, and in the other twelve colonies. Their worry, and their efforts to save the townsfolk of Boston, changed gangs of young rebels, into a unified nation of Patriots. Patriots, who with a common cause, organized against the government of King George III and started something amazing.