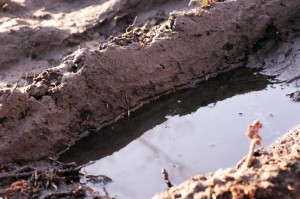 This is a tire track left by a city snow-plow in a park.

After last winter’s almost surreal amount of snow, this winter has been a balm for our backs and psyches. Of course we’ve shoveled snow a few times in the past two months, and more may yet fall from the skies, but anything that has fallen has dutifully melted within a day or two. But, of course it has been wet and cold with good melts in between, and that creates mud. Mud in New England is so much a part of late winter it gets its own season, and this year mud season has lasted most of the winter. I wrote this a few winters ago, and this year seemed like a good one to bring it back.

Before the age of corduroy roads; in places where no one had the good sense or ability to lay down a bed of gravel, the roads of New England were dirty and dusty. In the summer, towns sent out large barrels of water which were carted through busy streets and country roads, spraying water to keep down the dust. In winter, the roads were rutted and frozen. During the cold months snow-covered roads were more easily passable, and therefore snow-covered streets were preferable to those that were clear or melted.

But between the snowy or rutted roads of winter, and the dry, dusty streets of summer, there is a separate season. It comes just at the end of winter: we call it mud season. After months of hard freeze, the warm days and cold nights create inches thick mud that seems to sink downward with no end. Some years there is no one freeze that lets go at the beginning of spring. Some winters there is a never-ending freeze/thaw cycle; mud season from November to April.

In fields and woodlands, this cycle brings the ubiquitous boulders, called fieldstones, from deep in the earth. Deposited by three miles high glaciers from the Wisconsin Ice Sheet that ended about 25,000 years ago, these rocks were pried out of the fields each spring, and moved to the edges of the fields by strong young men, creating the stone walls that outline the border of every New England homescape.

This year mud season has been fantastic. Even with concrete sidewalks and macadam streets, the mud from yards and gardens oozes over, practically bubbling up in an icy mess that gets into the deep treads of our Vibram soles and covers floors of mud rooms, kitchen doorways, and front halls throughout the region. All this mud reminds me of a story told in early New England on this subject.

In times past, the mud of early spring was often many feet deep. One day, during such a year, a horseman was riding down a muddy road when he saw a fine hat lying in the lane. Because the hat was a nice one, and worth a bit of money, the rider got off his horse and went to pick it up. When he looked at the road under the hat, he noticed the face of a man staring up at him from the muddy road. “Are you all right?” the rider asked the face of the man in the road. “I’m doing fine,” replied the face, “but I’m worried about the horse I’m riding.” The implication, of course was that the animal was under the man, buried deep in the mud .