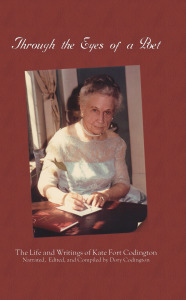 Fort Codington was a gracious lady of old-line Atlanta society whose roots were deeply embedded in the Victorian concept of dignity and decorum that characterized the aristocratic “Old South.” (She would, for instance, never serve at a table that was not daintily set, or drink tea from anything but fine china.) However Kate Codington was a universal and totally free soul, offering no allegiance to custom or circumstance, she ranged the farthest reaches of human imagination.

Using her poems and short stories, and a few memoirs of friends and family, her granddaughter has narrated the width and breadth of the life of this amazing woman, and the century in which she lived.

Advent in the Woods

I walked the woods
Where knotted trees
Like charcoal sketches
Sprawled the sky —
All separate,
Yet interwove
As old philosophy.

I walked the woods,
When suddenly
Dejection ceased
Its harrowing …
Bright from the manger of the fallen leaves
A blue-gray violet
Announced the spring.

Through the Eyes of a Poet is Available at these stores: