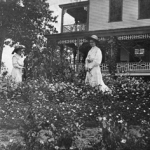 History is not for the squeamish. The same goes for genealogy, and it’s too bad no one told Ben Afleck or Deborah Nathan that. Let me explain. The other day, as reported in the DailyMail and then all over Facebook, it became known that Ben wanted the fact that one his ancestors owned slaves, censored from the genetic tracing show ‘Finding your Roots’. The PBS show is hosted by Henry Louis Gates, a man not afraid to confront the history of slavery in the American south, but for some reason, he let his friend fudge the past. The request to alter his genes came from Ben himself through Sony Pictures, and PBS agreed. (The fictional show aired on October 14, 2014.)

Deborah Nathan, commentator and public comedienne, recently discovered that her Texan forbears owned a few domestic slaves in the 1850s. She delved deep to prove it wasn’t so. Jews owning slaves, was that possible? But of course it was. It was Texas in the 1850s and if her ancestor wanted help in the store or house,  he owned the labor. It wasn’t as if he could drive by the HomeDepot and pick up a few workers.

It should not come as any sort of shock to Ben or Deborah, that people of means in the south owned slaves. The reality of labor in the southern states, was that labor was in short supply. Owning land was cheap. That meant there were few workers available for hire, slave-holding was the only option, and of course it was legal.

Careful before you gag with superiority, you northern moralists.

Labor is the north – after around 1800 give or take a few Rhode Islands and Connecticuts, which slowly and gradually abolished slavery between the years 1784 and 1848. Those states finally abolished slavery completley just fifteen years before the Federal ban, (known as the Emancipation Proclamation, signed in 1863) – was in short supply too, but keeping slaves in large numbers in the north, was more costly than hiring day laborers. Let me explain.

Think about what an owner owes his slaves. Remember these are expensive commodities, whatever we may feel about the institution itself, no one wanted his slaves killed or made unable to work. So except for a few famous cases (only unusually terrible situations made it into the court system to be transcribed) most slaves were housed and fed tolerably well. For the owner this required space to house his workers, and food to feed them.

I know you want to complain that the food was bad and the space was mean. I agree. (nolo contendere)

But the basic requirement for land and food didn’t work in the north. Families were large, and children supplied plenty of cheap, unskilled labor. Land was poor and rocky so there was little extra, and most farms remained small. Interestingly, those few places with abundantly fertile land, were those few places in the north where slavery held on into the nineteenth century. And by the first decades of the that century, immigration brought new, cheap labor to northern cities, making slavery even more expensive. It is simply cheaper to pay a laborer a few coins, and not care about where he sleeps or what he eats. With freedom comes the right to starve.

Deborah Nathan and her family were able to “come to grips with the past”, a concept I find laughable, because the past just sits there whether or not we can grip it. Also, I’m sorry that Ben feels ashamed of his people. They were within their legal, and historical right. He really shouldn’t have the right to disown ancestors, even if he disapproves of them. As I said, history is not for the squeamish, man up Ben.

For the record, many of my ancestors owned slaves in the south. My great-grandfather and his brothers fought for Georgia in the Civil War, and my father and mother fought for fair housing and jobs for Black Americans in the 1950s, 60s and 70s. I am no more “shamed” by my ancestors, that I take “credit” for their successes and discoveries. (Picture above is of my grandmother and her sister, Mt Airy, Georgia about 1907.)