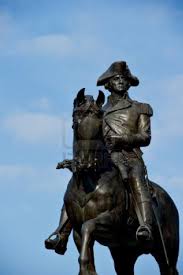 Recently I read an interview with an author of Medieval romances. She spoke of the era as lawless, and that the lack of social rules made some readers shy away from that genre, but she liked writing in a period that allowed a man and a woman to be discovered in a room together without scandal or forced marriage. That was just one of many reasons she liked this relatively chaotic world where the only law was the King’s word and he and his armies were largely absent. I agree that such times open up areas of romance and relationships to an author, that the rigid rules of the Regency cannot allow.

A few years ago I began writing about another chaotic, lawless era. Not lawless because the law was absent, though often it was, but because the known world was changing so quickly that rules seemed suspended. This is a short essay on how I began writing my Edge of Empire / World Turned Upside Down Series or the American Georgians, if you will. (George III and George Washington.) The novels take place during the American Revolution 1773-1780 plus or minus a plot point.

It all began when Jo Beverley’s Rothgar, mentioned ‘trouble in the colonies’ in conversation with his younger brother. Being an American historian with a deep love for, not only British history, but British historical romances, my antennae went up and I matched the “trouble” to the stamp crisis in Boston. Then Chastity discovered Cyn’s tomahawk-scar from an attack during in the Seven Years War in Canada or perhaps Massachusetts or New York. That is a war we in America call the French and Indian War. For us, this war began with Indian attack in 1675 and didn’t end until the treaty of Paris in 1765. Even then, there were attacks from Canada into western New York for another year. In those years, Americans were British, and army and militia fought together against the French and the Canadian Indians.

No non-fictional family explains the emotional conflict the American Revolution presented to the British aristocracy better than the Howes. Cousins of King George III, (their mother was an avowed illegitimate daughter of George I), three Howe brothers served in America during the French and Indian War. The oldest, General George Howe, led forces in New York, and died at Ticonderoga in 1758. He is buried near Albany, New York. George was greatly adored on both sides of the Atlantic and after his death the Province of Massachusetts paid for a commemorative plaque in his honor to be placed in Westminster Abbey.

In 1774, as the next crisis in the colonies heated up, George III asked General William and Admiral Richard Howe to go back to America to lead the Army and the Naval forces there. They agreed to go only if they would be allowed to seek reconciliation with the colonies. The King agreed, but he and his secretaries gave them no support.

With the inspiration of Ms. Beverley’s Malloren novels, and the fighting of the pro and anti Americanists in Parliament as background, I constructed a fictional aristocratic family, and the fictional Duchy of Chardon. The FitzSimmons are a large loving family with too many sons, two of whom I quite rudely remove from Britain, and place in America at the time of this conflict. One is a merchant seaman who lands in Boston the week of the “Tea Party” the other is a lieutenant on General Howe’s staff. There is a younger brother who will come to visit as soon as he finishes school.

Their mother, Elizabeth FitzSimmon, Duchess of Chardon, is an energetic redhead who has been involved in the raising of her children from their birth, and running all aspects of her household. She argues politics with anyone who will listen, and writes to the newspapers as Queen Bess. She visited family in America, some time in the past, and loved the land and its people. She is a cousin of General John Burgoyne. The same John Burgoyne who landed in Boston with William Howe in the spring of 1775. Elizabeth and her ilk are not shy in telling him he is a buffoon when he does not believe the Americans on the frontier will fight hard and well. She is proved correct.

The  two oldest brothers, Robert and Stephan sit in Parliament. Robert takes his father’s seat in Lords, because the Duke won’t travel anymore, and Stephan was elected as an MP for the district. Both men are sympathetic to the American cause, as were many others to greater and lesser degrees. Historian, David Hackett Fischer refers to this as the King in Parliament Whigs, (the British), vs. the no King in Parliament Whigs, (the Americans), the two sides agreed on almost everything except that one thing, and it was insurmountable!

In my stories, three family members: Stephan; Thomas, the third brother; and the husband of their older sister, Elizabeth, own a shipping company named after the family. Jason, the fourth son, has been in the employ of this company as first mate on the Chardon. Cardinal Points begins as Jason makes landfall at Boston, Massachusetts, in December 1773, simultaneous to the treasonous events of the night. He decides to leave his brothers’ employ and strike out on his own.

John’s story In Fate and Fair Winds, begins during his travels. He had been tasked by General William Howe to come to an understanding of the Americans. This was part of the efforts of the Howes, William and Admiral Richard, at reconciliation with the Americans. John lands in Philadelphia at the time of the signing of the Declaration of Independence. He is fiercely loyal to the King and the notion of nationhood, but he grows to believe that Parliament has betrayed the English ideal of representative government with their intransigence toward the Americans.

So, mine are the stories of the extra sons as a new world unfolds before them. Each man meets an American girl. Each eventually finds love in a topsy-turvy world.

What I have tried to do in these books, beside giving the reader a fun story with adventure and romance, is to complicate the narrative of the American Revolution. To tell stories, not through military victories and losses, but through the eyes men and women finding love in the midst of rhetoric and revolution.

When General Charles Cornwallis surrendered to General George Washington in October 1781, he had his band play a tune called “World Turned Upside Down.” For an Enlightenment Englishman of that time, losing the colonies was not simply the loss of valuable real-estate, but an alteration of the way things should be in an ordered world. Quite literally, the known world had ended.

As I say on my book covers: In a world turned upside down, the only right – may be love.