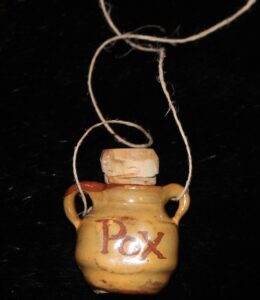 The medical information in this section is from Tomlinson Fort’s Medical Practice; a source of information for physicians and laypersons; 1849, one of the first medical books to explain the description of disease, and treatment as it was known.

The little clay pot is what doctors wore around their necks to keep the virus warm and alive to use in inoculations.

Beside Turning Water : by Dory Codington

The Danns were a family of quiet patriots who had needed to stay in Boston in order to protect their shop. They had been kind to him, even as he played the foolish loyalist. Alex thought they might have suspected he was not what he seemed, probably because he allowed Andrea, the beautiful Mrs. Dann, to see the physical and emotional exhaustion he hid during his interactions with British officers and refugee loyalists.
The window curtains were closed, but the door was unlocked when Alex approached the house at the back of their shop. Alex put his head in and called out. He was answered by Robby, their six-year old.
“Mr. Peele, up here. Ma and Poppa are sick and Davida don’t look good.”
Alex ran up the stairs two at a time. The sight did not frighten him. He had been inoculated when he was little older than Robby.
“Robb, how long has everyone been sick?”
“I was sick first. Momma took care of me. She tried to keep Davida away, but she came to read to me when the fever was bad. I’m better now. See?” He pulled his shirt open to show Alex the healing pustules. Lucky for the boy, they were thinly scattered over his neck, face and chest. Clearly his disease had taken its course, and he would heal with good food and rest.
Alex knelt down to check the boy’s parents and thirteen year old sister. They lay on hard mattresses on the floor under thin blankets. Each wore a thin nightshirt with the sleeves sewn together at the hands to prevent scratching of the itchy pustules.
“Andrea?” Alex gently shook her awake. He was impressed with how well she had prepared for the family’s illness. So much trouble was caused when a patient’s fingernails spread the pus while scratching. “I’ll stay till you are better, all of you.” He pulled the curtains closed against the bright light, speaking soothingly as he moved around the room. He checked Robert Senior and Davida. Both already had pustules, but neither seemed to be so covered with the red blisters as to be stricken with what doctors called “the confluent type” of the disease. “It looks to me like you all have a mild case. Now rest. You’ll hear us in the kitchen for a few minutes, but Robb and I will be right back.”
“Alex, there’s calomel and laudanum in the cupboard over the stove.” Andrea’s voice was hoarse, and she spoke very softly.
Alex hunted in the kitchen for the medicines and herbs he wanted. There were no cures that he knew of, but things that would cool the hot bodies of his patients would speed their healing. Right now all he could do was to keep them cool and let them sleep until their bodies demanded food and a cozy bed, the signs of healing. He made tea and let it cool to room temperature. Then, with a bucket of cold water and piles of clean rags, he and Robb went back to the sickroom.
He showed Robby how to give his patient a drink by dipping a clean rag in the water and holding it to his mouth. He showed him how to wipe the patient clean with cold water, clearing away the matter from the weeping pustules and cooling the patient at the same time. Then he made a thick broth for the recuperating boy and sent him to bed in a clean, aired room.
Alex washed the bucket and rags in hot soapy water and began the entire process over again. He cursed his bad luck at having to stay in town, but at the same time he was relieved to have been here to help his friends. He knew others were similarly infected. It was even suggested that the arrival of the contagious disease among his army was one of the reasons for Howe’s decision to evacuate – that Washington’s stand at Dorchester Hill only fixed the date to make it sooner rather than later. Whatever the larger causes of military maneuvers, Alex knew he wouldn’t leave until these good people could take care of themselves.

His patients all survived. Luckily, Andrea and Robert Sr. had been inoculated when they were children, so although they contracted the disease, it had been mild, and they had healed quickly. Young Davida had a harder time, but she would heal. With luck she would not be too badly scarred. Right now, a good soup bubbled over the fire while the family napped upstairs. He would call up as he was leaving. Andrea assured him, now that the contagion had passed, her mother would come help her cook and clean. Alex wondered how an older woman might have missed becoming exposed all those years, but it was not his problem now that the Danns were feeling better.
He did not leave until the next day, not until his clothes were cleaned and dried in the bright sun. It was instinct to get rid of the smell and sweat of working with the sick, but doctors had written about the contagious nature of smallpox, and that simple washing of hands and clothes would stop transmission. He didn’t know if the disease had become an epidemic in the countryside, but he wouldn’t be responsible for spreading it.